I’ve been a loyal Android user for the past four years or so. Before that, like most of you I reckon, Nokia S40 was my thing. Being my first and only Android phone, I’ve really taken good care of it to the extent people can hardly stop themselves from commenting on that fact.

Still four years is a long time, and as you would expect some wear and tear is inevitable, though I blame mainly the plastic body and some poor design choices for this. As far as the OS goes, gingerbread has hardly lost any of its aroma in my breakfast table.

Either way, I needed an upgrade badly (I need me some music and the earphone jack was done for good thanks to my tinkering) and so I started weighing my options.

Naturally Android was my first choice but then I remembered Nokia’s (X, XL) short lived stint with said platform that had sadly failed to take off. That got me really thinking.

No one can refute the amazing hand the Finns had in making quality durable phones, something you can hardly speak of the gazillion Android manufactures out there.

Anyway, my bright hypothesis was that since Microsoft had acquired this previous powerhouse talent and infrastructure, they most definitely did carry on its spirit on their new range of phones – the Lumia – they even kept the name, that was a good sign already.

That brings me to Windows Phone or Windows Mobile as they call it now. This platform is not as popular where I come from and as such it’s quite a task to get a feel what’s it’s all about. Microsoft is not doing itself any favour on that regard based on their advertising and pricing, but that’s beside the point.

At this point in time mostly what I had heard was good. The obvious ones are that they pack some awesome cameras and that they don’t “hang” as much. The latter point taking a swipe at Android’s coping strategy at the infestation of some pretty nasty malware of which I’ve been called upon a couple of times to exterminate.

I’m neither the budding photographer nor the selfie devotee so the camera was hardly an issue. On the point of hanging, that seemed like good news but I wasn’t taking it for the gospel truth. From my experience, most “hanging” is usually a matter of poor choices, something that even the perfect OS can’t rise above.

Whatever the reason that would make me get a windows phone these two wouldn’t cut it for me. So I decided to focus on the most important factor: budget or as some economist would put it, cost-effectiveness.

On budget alone, Android was a clear winner. However the cheaper I went, the more I compromised on the hardware and build quality – two things crucial for durability. Adding some few coins got me some very good choices but alas nothing really tickled my fancy! Problem: big screen-mania.

I mean, it seems like every Android manufacture has really jumped on the 5″ and above bandwagon. Still I can’t really blame them; they need to turn profits every quarter and the consensus among consumers is “the bigger the better”.

It’s actually a good thing for them, since they can compromise on the hardware for bigger terrific displays while keeping the price affordable. A win-win situation I might add but at the complete neglect of 4″ and below sticklers like yours truly. I hope am not alone on this.

Smaller displays in smartphones are slowly heading along the rare oddity path. My persistence with them is that the bigger displays are for one not ideal for one hand use and two, they will never, and I mean never fit well in all of my pocket trousers.

At this rate I guess it wouldn’t be farfetched to predict that man purses or something closely resembling this atrocity, are on their way to global domination. Perhaps in the near future they may even become part of the accessory package or an after-market upgrade retrofitted by licensed third parties. You just wait and see!

Back to Windows Phone

The budget strategy was clearly not working with Android so I went two steps behind from where I had started – Windows phone. After some exploring I stumbled upon some very potential candidates. Microsoft clearly prefers 4″ displays for their entry-level devices.

Contrary to some Android OEMs, the bigger the display on a Lumia the more powerful and pricier it gets. However, I’ll admit the naming scheme on Lumia’s can be quite confusing at times. Anyways, the phone that had got my biggest attention was the Lumia 430. 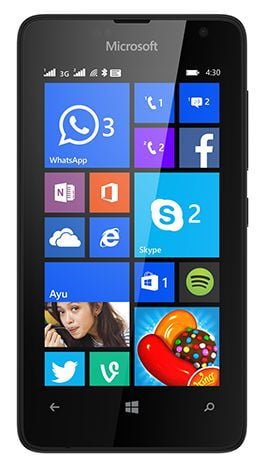 This was the cheapest Lumia phone available and is still at the time of this writing.

The cons were not so much of a deal breaker though it’s hard to overlook the battery capacity – its actually seems like a joke when you look over at the Android camp and see phones in the same price range packing 2500-3000mAh batteries.

Just the other day I saw one with 5000mAh! I’m guessing this has something to do with them being Li-polymers rather than the standard Li-ions though I could be wrong. Still for the price, there was not much to complain about.

Suffice to say, I got me some of that Lumia 430 goodness. It’s been 3 months now since and I haven’t used it as much – the goodness only lasted for a while before the bittersweet aftertaste kicked in.

Thankfully, that four year old Android phone has just refused to die. Why the bitterness? Well, I’ll let it you on a secret – it has nothing to do with phone per se, rather it’s what it powers. I with my budget conscious pocket overlooked the most important thing in any smartphone – the OS. I had just assumed things were all bright and shiny in those parts. Man, was I wrong.

Now it won’t be fair to leave it that without justifying my claims. On my next post or one in the near future I will highlight the drawbacks on the part of the OS and in particular Windows 10 mobile which I realize is a service, which is to mean is a work in progress and thus has potential for a turn around. In the mean time, the Lumia is up for grabs at a very, very, discounted price.

Kelvin Kathia is a writer based in Kenya that's passionate about sharing solutions to everyday tech problems. He's the founder and editor of Journey Bytes, a tech blog and web design agency. Feel free to leave him comments or questions regarding this post, or by leaving him a message on the contact page. If you found his content helpful, a donation is much appreciated.