If you don’t fancy the idea of your music player messing around with music tags then a folder player is just what you need. Folder players essentially don’t bother sorting your music based on albums, artists or genres but instead list them as they would appear on a file manager like File Explorer.

For some this seems like a rather absurd thing to do, but the truth of the matter is that tag based music players have the reputation of reading tags wrongly at times resulting in a total mess. So to avoid all this, some people like yours truly just organize our music in different folders then fire up a decent folder player.

My favourite app at the moment for that task is Perfect Folder Player by Perfect Thumb. It’s not quite  as perfect as the developer may want you to imagine but nonetheless it does the job quite well. 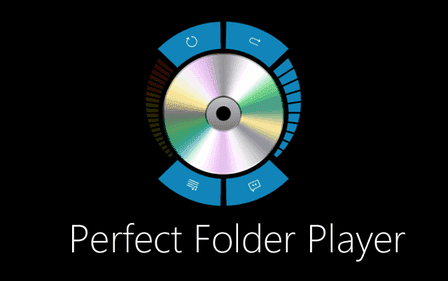 Right off the bat the one thing you’ll realize about this folder player is that it’s not as bare bones as we come to expect from folder players. The first time you launch it, instead of asking you where you store your music, it just carries out a quick scan and detects all the folders with the music.

The folders must however be located in the preset “Music” folder, otherwise it won’t find the music. This is also true of other music players in Windows Mobile including Groove Music.

After finishing this one time scan, it lists all the folders with the music together with their number count. To play the music is as simple as opening the folder you need then selecting the track you need to play. By default, the player plays the next track in the folder when it’s done playing the one selected.

The four buttons are for showing the music folders, displaying embedded (tagged) lyrics, shuffle and repeat. The bars on the other hand are for increasing volume and dimming the background – from total white to pitch black. The developer clearly cares for the plight of our eyes. 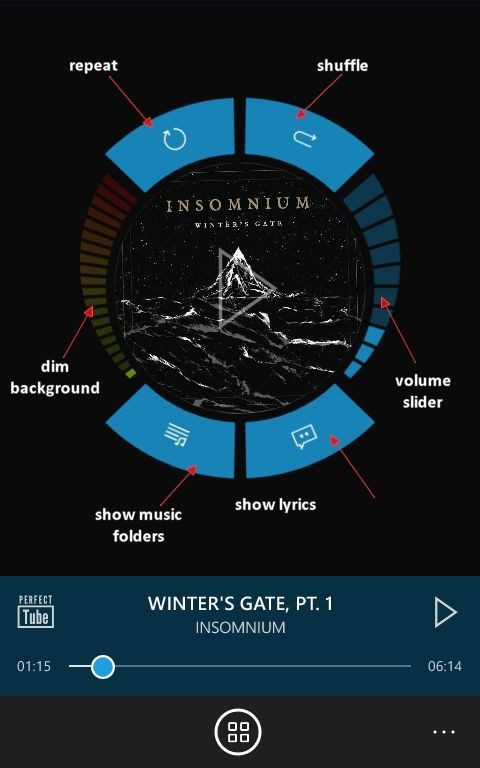 The rotating disc thingy also supports gestures with tapping for pause/play, swiping right for next track and left for previous track. Swiping left on the now playing page also reveals the lyric page, which might add is a thoughtful addition seeing most Windows Phone/Mobile players don’t bother with embedded (tagged) lyrics.

Other features of the app player include:

Some issues I’ve observed while using the app include:

1. It has an odd way of sorting the tracks in the folders; for some reason it ignores the numbers in the file name. To make matters worse it plays the tracks in this order. (compare the screenshots below)

2. The font size used for displaying the embedded lyrics is rather small and there’s no way of adjusting it

Perfect Folder Player is nowhere close to being perfect but it’s rather unique take on a folder player is quite refreshing. The fact that it displays embedded lyrics was enough reason for me to keep it anyway.

What’s more, it’s completely free, though if you don’t like ads you may want to consider supporting the developer (Perfect Thumb) by purchasing the ad-free version.

Get Perfect Folder Player from the Store

Kelvin Kathia is a writer based in Kenya that's passionate about sharing solutions to everyday tech problems. He's the founder and editor of Journey Bytes, a tech blog and web design agency. Feel free to leave him comments or questions regarding this post, or by leaving him a message on the contact page. If you found his content helpful, a donation is much appreciated.